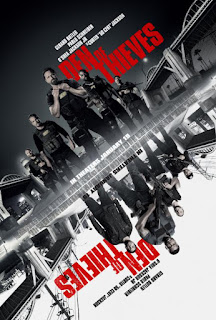 Honestly, I went into this one expecting a small caliber thrill ride, a generic cops and robbers flick with an emphasis on action.  To my surprise, I got a lot more.  It's not exactly Heat, but it might pass for Heat on steroids.  Den of Thieves boasts a nifty plot with at least one quality twist, and it is bookended by two spectacular action setpieces.  Gerard Butler headlines the show, giving anyone who has ever wondered what a corrupt and perhaps even deplorable version of Leonidas would be like the answer they seek.  This dude hunts bad guys at the expense of everything else, sacrificing both his humanity and his family ties in a single-minded quest to nail his prey.  Furthermore, there is no doubt that he does this because that's how he gets his rocks off, not because he has strong ideas about morality or some innate purpose born of aggresive nobility.  The bank robbers are led by a ripped Pablo Schrieber, a game 50 Cent, and a positively dazzling O'Shea Jackson, Jr., who damn near steals the show in spite of all the firepower on display.  This crew kills several cops in the opening reel--and yet they emerge as more humane than their counterparts with badges over the course of the film.  It's an interesting dynamic, and the complex medley of sleazy good guys and endearing bad guys allow writer and director Christian Gudegast to paint a vivid picture.  However, though the end result is a riveting showcase, it's a riveting showcase without a genuine rooting interest.  That is the movie's biggest flaw, but it never derails the excitement or lessens the drama.  It just won't leave you feeling warm and fuzzy at the end of the day, regardless of who comes out on top.  In summary, Den of Thieves falls short of being a rip-roaring crime epic, but rises well above the mediocre trappings of the action genre as we know it in 2018.

Posted by James Wayland at 4:35 PM No comments: