Short Attention Span Review: Beyond the Valley of the Dolls (1970) 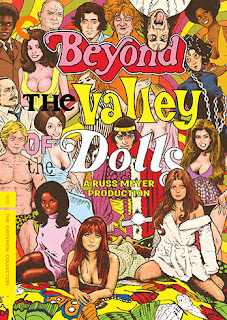 Short Attention Span Review: Beyond the Valley of the Dolls (1970)

Some might label this film trash.  Some might describe it as a true masterpiece.  I tend to think that both views are accurate, and the potent blend of sleaze and artistry make it one of my favorite pictures.  The story is also a medley, with Beyond the Valley of the Dolls emerging as a parody, a melodrama, a skin flick, a musical, a comedy, and even a horror movie, all rolled into one.  Written by Roger Ebert (his sole credit as a screenwriter) and directed by softcore maestro Russ Meyer, this sordid affair is populated by zany characters and buoyed by solid performances.  It's a credit to Meyer's ability as a director that even the most absurd sequences are played straight by the talent involved.  In fact, the humor born of the rampant satire embedded in the piece works because no one involved treats it as camp.  Most impressive is the editing, with Meyer cutting, and cutting, and cutting, yielding several impressive montages and numerous scenes where dozens of shots are utilized to propel the action.  There are points where Meyer may cycle through as many as forty or fifty shots in a minute, and the results aren't choppy or jolting but rather sublime.  I also have to give the music some serious props and John LaZar's work as Ronnie "Z-Man" Barzell is a joy to behold.  Finally, the movie goes off the rails in a bonkers finale that firmly solidifies this one as cinematic gold.  Beyond the Valley of the Dolls is definitely one of the sleaziest movies ever made--and I also think that it's definitely one of the best movies ever made.

Posted by James Wayland at 9:03 AM No comments: