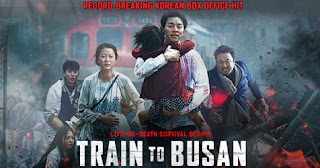 Wow!  I had heard good things about Train to Busan, so when I sat down to watch it I was expecting big things of this landmark zombie thriller from Korea.  These lofty expectations were appropriate--I can honestly say that I was totally blown away by this fast-paced rampage.  In what may or may not have been a nod to Romero, the picture was ripe with social commentary, and it was also host to some well-drawn characters with emotional arcs, but this never kept it from racing down the tracks.  Gory, exciting, intense, and moving, Train to Busan is easily one of the finest zombie movies that I have ever enjoyed, and that's one hell of a statement coming from yours truly.  Director Sang-ho Yeon did a marvelous job of keeping things popping while telling a story with an awful lot of heart to go along with all the blood and guts splattering the screen.  The cast performed flawlessly, and while there were a few cliches in the mix, everyone had a lot to do and I felt that each performer made the most of their opportunities to shine.  Leading man Yoo Gong nailed it, and young Soo-an Kim did a remarkable job in a demanding part with a lot of depth and nuance.   Yet it was Dong-seok Ma who stole the show, combining grit and warmth to tremendous effect.  Eui-sung Kim gave us a horror movie dickhead for the ages, and eagerly anticipating his demise greatly bolstered my viewing experience.  In closing, I found Train to Busan to be thoroughly effective on every level, and it is not only my favorite horror film from 2016, but I will reiterate that it has to be one of the best zombie films out there.

Posted by James Wayland at 1:55 PM No comments: 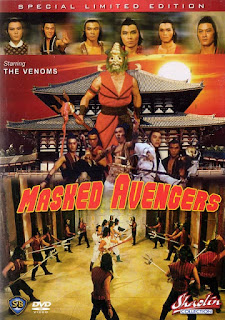 This one has all the necessary ingredients for a classic Shaw Brothers exercise in Kung Fu Treachery: Chang Cheh in the director's chair, key members of the Venom Mob in the cast, a sinister mood, and an abundance of gore.  Of course, it should go without saying that Masked Avengers is also enhanced by the colorful costumes and sets and the breathtaking choreography that make the Shaw Brothers library so worthwhile for connoisseurs like yours truly.  I would rank this among their more frightening offerings, and I think that the fact that the masked killers terrorizing the countryside in Masked Avengers are armed with tridents gives this one an advantage.  While Shaw Brothers movies are revered for their fight scenes, to include big brawls with multiple cast members and stellar weapons choreography, the use of tridents makes Masked Avengers rather unique.  The picture hits several familiar beats for fans of Chang Cheh's work, to include secret identities, deadly alliances, and characters whose motives remain murky until they finally pick a side in the grand finale.  Speaking of which, the big showdown that marks the conclusion of Masked Avengers has to rank among the studio's very best.  It's a real showstopper, and those who enjoy such fare will definitely be thrilled by this sadistic climax pitting terrifying villains against valiant heroes in a bloody battle that is thrilling and creative in equal measures.

If you enjoy these pictures as much as I do, check out my reviews of other top shelf martial arts flicks from the Shaw Brothers:

Note: I didn't realize until I was digging up these links that I've apparently never reviewed the one Shaw Brothers classic that rules them all: The Five Deadly Venoms.  I promise my faithful readers that I will remedy this situation shortly.
Posted by James Wayland at 9:08 AM No comments: 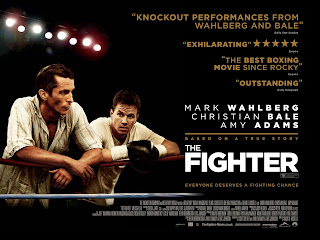 First off, the thing with rating boxing movies is the depth of the field.  If you set out to make a great volleyball film, the world is yours.  If you set out to go toe to toe with Rocky or Raging Bull, . . . well, things could get ugly.  Thankfully, while The Fighter is vastly inferior to the great boxing flicks of yesteryear, it mostly stands as a drama with a landmark performance anchoring it.  Unfortunately, those great boxing flicks of yesteryear may have been more reliant on boxing, but they were also heavy on the drama, and with The Fighter that landmark performance doesn't belong to the leading man.  The end result is a bit off as a result, though the movie is surely entertaining and crafty.  The soundtrack is great and the dysfunctional family that the story revolves around offer up a steady stream of memorable moments.  The entire cast is game, and de facto star Mark Wahlberg is solid as "Irish" Mickey Ward.  This humble underdog's rise to fame is the backbone for David O'Russell's fast-paced chronicle of the pugilist brothers who put Lowell, Massachusetts on the map.  The other brother in this equation is Dicky Eklund, played to sheer perfection here by Christian Bale.  Yes, Ward is the up-and-comer whose quest for glory is on center stage, but it is Eklund the drug-addicted has-been who makes The Fighter worth watching.  Bale disappears into his role (as he frequently does) and his startlingly authentic portrayal of Eklund is tragic, wildly entertaining, and ultimately incredibly uplifting.  Wahlberg never falters in a less interesting role, but while watching The Fighter I couldn't help but think that it would have soared far higher if it was centered on Bale's Dicky Eklund instead.  As for the boxing bits--well, they're not bad, but we've seen far better.  In the end, we're supposed to be thoroughly impressed when Mickey's hand is finally raised, but Dicky's antics and his gut-wrenching battle with addiction are far more gripping.

Posted by James Wayland at 10:18 AM No comments: 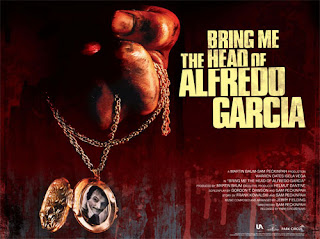 For me, there is little doubt that The Wild Bunch was Sam Peckinpah's best picture, but it isn't my favorite movie that he made.  No, my personal fave from this legendary director is a curious ode to tequila, violence, and greed.  That's the best way I can describe Bring Me the Head of Alfredo Garcia, though I should note that while paying tribute to these vices, it also serves up a gruesome example of the ultimate price one might pay for embarking on a quest to satisfy such wicked cravings.  Warren Oates was a gifted performer who was totally at home in many potent roles in an abundance of finer films, but I don't know that he was ever given a better part than the lead in this blood-soaked gem.  Sleazy but endearing, he owns the screen, blazing a path of destruction within and without as he first succumbs to his wretched desires and then rises above them.  In the end, a valiant moment of defiance and a hail of lead closes the picture out on a downbeat note in true 70s fashion.  Uneven and difficult to watch at times, there are also wacky moments that are strangely compelling--with many of these centering upon the main character's budding friendship with a rotting head in a burlap sack.  It's that kind of movie, and while it's far from perfect, it surely benefits from a terrific performance courtesy of Oates and Peckinpah's trademark flair for gunfights and machismo.

Posted by James Wayland at 8:49 AM No comments: