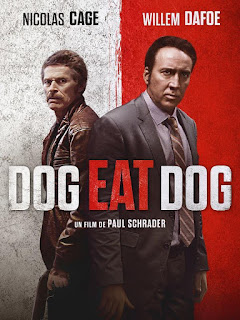 Dark as all get out, quirky at every turn, and punctuated by startling displays of violence, Dog Eat Dog is a comedy at heart.  And it's a sick comedy, and several key plot points are nothing short of revolting, but damn if it isn't funny.  Aside from dishing out disturbing chuckles, it also takes time to explore the nature of good and evil at the intersection of convenience if not need, and it asks whether or not a hardened con is more or less inclined (or even capable) of changing after spending time behind bars.  None of the answers this quixotic offering from Paul Schrader provides are all that hopeful, and many of the biggest questions aren't really answered at all.  This is a journey with an ultimate destination that is difficult to define, and there are several junctures where the line between reality and fantasy are blurred.  In truth, I think Schrader was more interested in showcasing his talent and provoking the audience than in arriving at anything resembling a conclusion, and this may be both the picture's greatest flaw and its biggest selling point.  Cage is on in a relatively tame performance, while Dafoe is at his best in a dizzying turn as a run of the mill fearsome lovable lunatic with bloody hands and a warm smile.  I can't tell you what it all means, but I can tell you that I laughed way more than I should have, and I was never bored by this wonky caper flick from a tinseltown legend who shows no signs of mellowing with age.

Posted by James Wayland at 11:09 AM No comments: 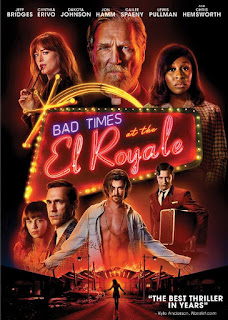 Dripping with nuance and a sinister vibe, equally mysterious and wild, Bad Times at the El Royale is a picture that hits a lot of familiar beats in fresh and unexpected ways.  The first act is a nifty slow burn that draws you in, the second act is a dazzling descent into secret identities and desperate situations, and the third act is a sizzling eruption of violence served Grand Guignol.  Crafted with nuance and wit, built upon a lethal script and masterful direction from Drew Goddard, this is a striking venture that never fails to enthrall and entertain.  Goddard, who also gave us the splendid and wickedly inventive Cabin in the Woods, shows a real knack for taking cliches and standard tropes and twisting them into diabolical new shapes.  However, while Cabin in the Woods was a devious kick in the pants, I found Bad Times at the El Royale to be a masterpiece that takes noir to groovy new heights while striking some truly ominous chords along the way.  The performances are exceptional, with Jeff Bridges and Cynthia Erivo leading the way while everyone delivers.  Jon Hamm really sets the stage in the opening reel, while Chris Hemsworth arrives closer to the finale, delivering what may have been his most challenging and richest work.  Psychotic and seductive in equal measures, he is the lynchpin for this rollicking odyssey born of paranoia and intrigue, and he is the catalyst for all the groundwork that Goddard lays along the way to a powerful climax.  This review may ring of hyperbole, but I can honestly say that I had high hopes for this one, and it far surpassed my expectations.  I hoped for a gnarly oddity, and I got that and so much more--Bad Times at the El Royale is one of the best films I've seen in a while, and it is a credit to the efforts of everyone involved that it proves to be so mesmerizing.

Posted by James Wayland at 12:04 PM No comments: 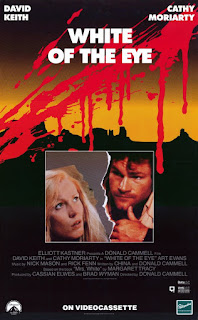 This little-known thriller from the late 80s is often described as an American stab at the beloved Giallo sub-genre that put so many Italian directors on the map.  I can see some similarities, so I understand that sentiment, but I find it to be something different, a curious opus that pays homage to many things but ultimately stands on its own.  The direction from Donald Cammell represents a stellar vision that is stark, inviting, subversive, and wildly grim.  This picture has a thing for vivid colors and gruesome subject matter, and it is rooted in the queasy realms of power and domination masquerading as purpose, painting an intimate portrait of a madman.  In fact, the lines between the killer we fear and the leading man we are drawn to are blurred, and even those with the closest ties to the murders contained within this pulsing chiller can't decide whether they love or hate the twisted soul who finds purpose in dismemberment.  The score by Nick Mason is a big winner, and the performances are on point.  David Keith is perfect, and Cathy Moriarty matches him stride for stride, while Art Evans and Alan Rosenberg take smaller roles and turn them into major assets.  Few thrillers operate with this much charisma while probing such depths, and the end result is a bit of a mystery.  While the events portrayed are far from ambiguous, the viewer's reaction may be defined by a sense of puzzlement.  When all is revealed, it is difficult to determine just how we should feel about everyone involved, and that is why I cherish White of the Eye.  It is provocative, it is exciting, and it asks a lot of tough questions that it answers by dishing out a lot of tough answers.  Evil can be quite seductive.  Evil may even be rather charming at times.  And those who go toe to toe with evil may taint themselves in the process.  Most don't view this type of fare for such meditation on the darker aspects of humanity, but those who do may find this true one of a kind to be immensely satisfying in its thirst for perversion and identity.


Posted by James Wayland at 4:08 PM No comments: