Powerful Pages: Lightning in a Bottle by Monte Dutton (2017) 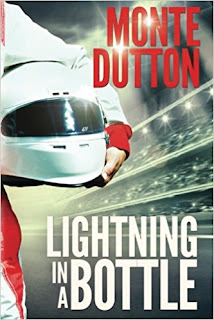 Powerful Pages: Lighting in a Bottle by Monte Dutton (2017)

Monte Dutton is a promising author who I consider a friend, a fellow outsider who is more interested in spinning an entertaining yarn and delivering readers a good time than assembling the necessary ingredients for whatever is en vogue within the industry this week.  He has a strong background writing pieces about Nascar, so it is no surprise that his adventures on the printed page finally brought him to a meditation on auto racing.  With Lightning in a Bottle, Dutton has conjured up precisely the type of driver his semi-fascist racing entity FASCAR needs--even if this frisky upstart also happens to be precisely the type of driver the powers that be are hoping to avoid.  Barrie Jarman is bold and ambitious, an "aw shucks" country boy whose easy-going demeanor masks a keen intellect.  A quick study with a quicker tongue, Barrie has a God-given ability to tear it up at the track--any track.  He's also fiercely protective of his identity and his need to express himself, and going along to get along isn't one of his many skills.  His adventures on the racing circuit are the backbone of a brisk yarn that also concerns itself with family dynamics, the cost of success, the war against corporate tyranny, and a host of political issues.  If that sounds heavy, fear not, for Dutton's warm approach coupled with his light touch keep things moving and interesting at all times, and he never substitutes a sermon for a punchline.  His ear for dialogue and his racing IQ are on full display throughout, and one might argue that these are the books greatest strengths.  In terms of plotting and excitement, I can't identify any real flaws, but sometimes the broad strokes and rollicking pace work against the material.  There were numerous points where I wanted a closer examination of the various conflicts at play, and I also yearned to savor Barrie's triumphs a bit more.  However, I'm not willing to take Monte to task; I liked Barrie too much for that, and I laughed way too damn much to complain.  While Barrie's presence and drive are the beating heart of Lightning in a Bottle, I must admit that the narrator, his seen-it-all Uncle Charlie, quickly emerged as my favorite character.  Monte has captured lightning in a bottle with Barrie, no doubt about that, and I'm eager to read more about this hell-raising one-of-a-kind, but Uncle Charlie's grass roots philosophy dressed up as dry humor took the checkered flag in the race to my funny bone.  Fresh and captivating, Lightning in a Bottle is a quick read that will tickle and inspire you in equal measures.

Final Grade: A-
Posted by James Wayland at 10:26 AM No comments: