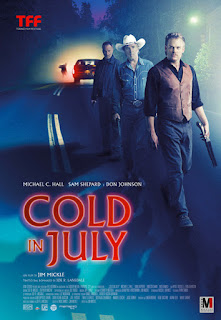 Sam Shepard was a true legend, a gifted actor who was probably a better writer, and his passing has been marked with a wealth of tributes that honor his legacy.  As I read about his filmography, I realized that I had never watched Cold in July despite the fact that it had piqued my curiousity when it was released back in 2014.  Thus, I decided to go ahead and check out this slow boil of thriller set in 1989, and I'm certainly glad that I did.  The de facto star is Michael C. Hall from Dexter, and while he rocked a hideous mullet and embedded himself in his role, Shepard made for a bigger presence.  Not surprisingly, both of these quality performances were overshadowed by Don Johnson once he showed up about halfway through Cold in July, stealing the show in a part that falls just short of iconic.  The direction courtesy of Jim Mickle was sound and the real star attraction had to be the riveting score by Jeff Grace, who was clearly paying tribute to 80s cinema by way of John Carpenter.  The pace was a bit uneven here and there, and while I can appreciate a nice slow boil, things did drag a bit at times.  Given that the movie is based on the work of Joe R. Lansdale, it isn't surprising that it concludes with a gory showdown, though I was surprised that there were so many plot threads left dangling.  I don't think I can grade this one any higher than a B-, but it was one bloodthirsty B- and that may not even be a bad thing considering that Cold in July is a B movie by design.

Posted by James Wayland at 4:31 PM No comments: 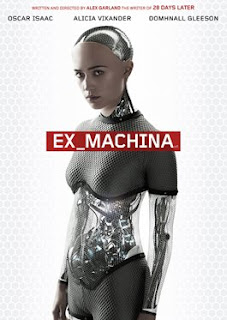 Though it doesn't feature a lot of action, Ex Machina is a thoroughly captivating science fiction thriller that had me glued to the screen from start to finish.  Existing as a modern take on Frankenstein by way of artificial intelligence, it posed a lot of interesting questions and played hardball with the answers.  Essentially a three man (well, two men and one woman) show, the picture kept me guessing until the final reel.  Domhnall Gleeson made for a perfect lead, and I never knew whether he should place his trust in the likable but imposing mad genuis played by Oscar Isaacs or his charismatic creation as portrayed by Alicia Vikander.  And every time I thought I had pegged one of those characters as being worthy of his allegience, the plot would serve and I would find myself puzzling over the eventual outcome once more.  Stylishly directed by Alex Garland (who also wrote the script) and boasting rad effects, I found Ex Machina to be one groovy mindfuck.

Posted by James Wayland at 4:42 PM No comments: 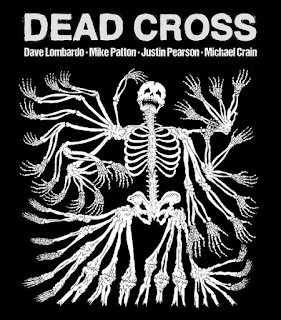 In fairness,  I should make my readers aware of the following tidbits:

1) Faith No More is my favorite band, and as such, there is little doubt that I would classify Mike Patton and the versatility and creativity that he brings to his vocals as the best things ever to happen to any microphone, anywhere.

2) I'm a diehard Slayer fan, and while I take nothing away from the band as a whole, I have stated on more than one occasison that if the band were to offer any album featuring Dave Lombardo as a drums-only release featuring his work on the skins alone, well, I would snatch that shit up in a hot minute.

So, this whole Dead Cross thing is a bit of a dream project as far as I'm concerned, and I want to make this clear as I obviously have a considerable bias at work as I sit down to write this review.  By the same token, these tidbits should denote a potent set of expectations regarding this latest release from the throbbing treasure chest of unruly sounds that is Ipecac Recordings.  As with anything one approaches with high hopes and a decided thirst, it was entirely possible that even a solid recording would have been a bit of a disappointment.  Yes, I listened to this album mere hours after it was released fully expecting to hear something noteworthy, and I'm very happy to report that I wasn't disappointeed.  In point of fact, Dead Cross has surpassed my expectations, and if there's a better way to spend 28 minutes listening to music, I'm not aware of it.  Most surprisingly, while Patton and Lombardo both rise to new heights and bejewel this stash of hardcore gold with the very best that they have to offer, it's the guitar work courtesy of Mike Crain (Retox) that really puts this sonic blitz over the top.   Justin Pearson (Retox, the Locust) also nails the bass parts for this brief but incredible descent into unbridled fury, but I was constantly amazed by the twists and turns that Crain threw down, thrashing and grinding his way through a guns-blazing assault on the eardrums that never fails to surprise or entertain.  Quirky, energetic, and brimming with tongue-in-cheek hostility, this is hardcore at its most enticing and inventive.  Dead Cross is a serious kick in the pants that should thrill any fan of exciting music in general, and those who are enamored with any of the participants will find everything they're hoping for and more.  Make no mistake, this is a fiery bundle of lunatic rage where 9 out of 10 songs come up short of 3 minutes in length, yet no stone is left unturned.  Standout tracks include every fucking one of them, no bullshit whatsoever, my friends.