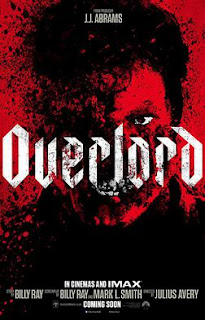 Overlord is a bit generic in many ways, and it doesn't do anything particularly new or inventive, but it does a great many things very well.  First and foremost, the opening and closing reel are bombastic forays into nearly unheralded excitement coupled with a gore quotient that would make Sam Raimi blush.  In fact, there is also an outlandish energy present in these segments that Raimi could appreciate, though I'm not sure that he has every done anything this hardcore.  And while it is far from revolutionary, it did brighten my heart considerably given that I haven't seen this sort of bloody romp on the big screen in quite some time.  The filmmaking is superb, with the opening descent into chaos in particular sporting some inspired bits that are both perfectly realized and totally incredible.  Most importantly, while the picture is often an exercise in unbridled intensity and gruesome shenanigans, it also takes the time to build some strong characters.  Yes, they're types to a large extent, but they are given enough to do aside from enduring supernatural Nazi terror that we ultimately find them endearing.  Our heroes are likable for the most part, and easy enough to root for, and the villains are suitably despicable and intimidating.  The big standout here is Wyatt Russell, whose Ford is so committed to completing the mission that grim setbacks, overwhelming odds, and even demented experiments gone wrong never threaten his devotion.  He oozes both badass and coolness, and the character is damn near iconic.  On the whole, Overlord is a zany action/horror hybrid that never aims for sophistication or greatness.  No, it merely exists to entertain, and it never misses on that front, serving up a vivid rollercoaster ride with wild thrills and spooky atmosphere to spare.

Posted by James Wayland at 6:06 PM No comments: