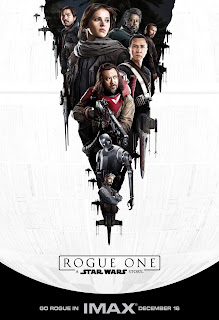 Rogue One is a different sort of Star Wars movie, and while the somber tone and the valiant sacrifices that punctuate the closing reel may not sit well with some, it cannot be denied this is one hell of a movie.  While the typical Star Wars picture is whimsical and far more gentle, Rogue One opts for an emphasis on grit and the perils of war.  Personally, I found this to be a sound decision, and by the time the film drew to a close, I was more invested in the material than I had been with any Star Wars movie since Luke lost his hand and Han became decor.  I'm not afraid to declare that this is easily the second-best Star Wars movie ever produced, and time may see it come to rival even The Empire Strikes Back.  The entire cast is worthy of praise, and this is due to the script as much as the talent involved.  Not since the original trilogy hit the scene have we witnessed so many rich characters with such captivating stories come together in this universe, and that desperate climax only serves to magnify the strength of the performances and the plot.  The effects are at an all-time high, the scope is clearly epic, and the significance of this standalone tale to the events depicted in the original that started it all cannot be overstated.  I greatly enjoyed Rogue One, and I was also greatly moved by it.  It exists both as a thrilling blockbuster and a thorough meditation on what it means to live and die for a cause.  Bonus points: in a series that has always found a way to give us a lovable droid to cherish, Rogue One gives us a cantankerous droid with a gift for sarcasm, and in doing so they may have topped R2-D2 and BB-8.  Seriously.  Also, there are a handful of cameos, to include Peter Cushing reprising the role of Grand Moff Tarkin thanks to some technical wizardry, and while it's nice to glimpse some familiar faces, it is Darth Vader's more substantial appearance that will have fans jumping out of their seats.  Vader has never been so badass, and Star Wars has seldom (if ever) found such an even blend of thrills and introspection.  Rogue One isn't just the best Star Wars movie to come along in a while, it's a damn good movie in general.

Posted by James Wayland at 7:05 AM No comments: 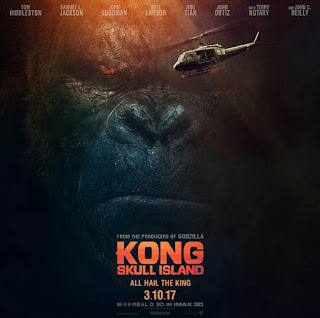 When I was a chap, Pop took me to see Godzilla 1985 and I had an absolute blast.  Last week, I got to take a couple of my wee ones to see Kong: Skull Island, and we had a blast with what is certainly a vastly superior film.  In fact, as a lifelong fan of both Godzilla and King Kong (and pretty much any other giant monster I've seen on-screen), I think it's safe to say that I don't know if there's any such venture that packs as much excitement into its run time as this 2017 thrill ride.  Now, it does suffer a little from a lack of originality (it does represent a fresh take on the material, but in many ways this is the still the Kong we all know and love) and it may not have the heart and soul that some of the more moving takes on this property have benefited from, but it is jam-packed with exhilaration and creativity.  The effects are stupendous, and a fine cast led by Tom Hiddleston, Brie Larson, and Samuel L. Jackson work very hard at not being upstaged by John C. Reilly at every turn.  Hiddleston proves to be a quality leading man, Larson's presence gives all the mayhem unfolding on screen some depth, and Jackson flirts with the Jon Voight in Anaconda approach.  It is Reilly who really steals the show, however, and while his humor is evident throughout, he also brings a lot of energy and emotion to Kong: Skull Island.  This slick motion picture is very much in the summer blockbuster mold, and those who get their kicks from creature features and 70s rock may not have a better time at the theater in 2017.  It's not a great movie, but it's a great time at the movies, and as someone who treasures this sort of material, I can't recommend Kong: Skull Island enough.

Posted by James Wayland at 7:25 AM No comments: 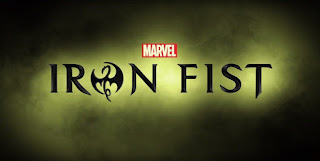 Despite some mindless controversy and a wealth of brutal reviews courtesy of critics (many of whom were unable to move beyond the "whitewashing" bullshit), viewers seem to have watched a different series altogether.  Whether you prefer Rotten Tomatoes or IMDB, if you compare and contrast the critic's ratings and the average joe's ratings, you'll see a gap that might be better referred to as a canyon.  Now, no one out there is hailing Iron Fist as a home run--and it isn't--but it is entertaining and it's a far cry from the utter failure so many critics have made it out to be.  Having recently enjoyed the series, I certainly agree with the viewing public, and while it wasn't nearly as invigorating as the first season of Daredevil or Luke Cage, I think it fits nicely with the rest of their Netflix offerings. 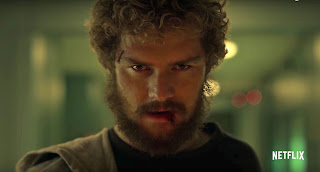 The critics were pretty much universal in their disdain for the presence of Finn Jones in the lead role.  Honestly, this is the first thing I've ever seen him in and I thought he did a fine job.  I'm a big fan of the comic book, and Jones nailed the innocence and warmth that separate Iron Fist from characters like Daredevil, Luke Cage, and the Punisher.  He also did a good job with the action bits, and while I recognize that he didn't do all of his stunts, this didn't really hurt the show at all.  And speaking of action bits, despite all the criticism aimed at the lack of such sequences, I thought this series had a lot more going for it in the way of throwdowns than either Jessica Jones or Luke Cage.  In the interest of full disclosure, I would have preferred to see a legitimate martial artist cast in the role, but I feel like Jones did a solid job with the part. 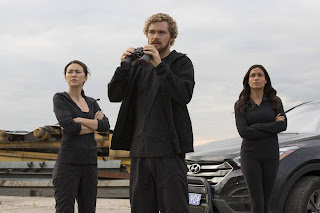 His supporting cast fared even better, with Marvel's Netflix mainstay Rosario Dawson continuing to excel as Claire Temple (Marvel's Night Nurse) while Jessica Henswick proved to be the show's biggest find as Colleen Wing.  Wing is a legitimate badass whose combat scenes frequently overshadowed those featuring the titular character.  I also found Tom Pelphrey to be a joy to watch, and his Ward Meachum may have been the character that the script provided with the biggest arc.  Whether the episode at hand required Ward to be an elitist dickhead, a coldblooded killer, a desperate junkie, or a semi-likable cat in search of redemption, Pelphrey was up to the task.  Jessica Stroup did a good job as Ward's sister Joy, a character tasked with hitting almost as many levels, but I don't think the script gave her quite enough material to work with.  Some of the key moments concerning her character were so abrupt and ill-defined that I can't say that she nailed it, though I don't hold her directly responsible.

Any show or movie is ultimately only as good as its villain, and David Wenham's Harold Meachum may have been the most impressive thing about Iron Fist.  Given my affection for the source material, I was pleased to hear that Wenham had been cast in this part, and given his talent I knew that Harold would likely be the big bad for the first season.  I was totally cool with this, and I have to say that the Harold Meachum of this Netflix series emerged as a more intriguing and credible threat than his comic book counterpart.  Wenham chewed scenery and brought a lot of physicality to the role, consistently stealing the spotlight and elevating the program whenever he was on screen. 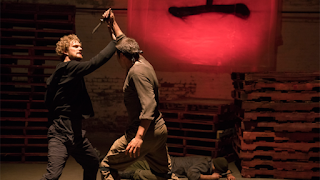 Like I noted earlier, many of the show's biggest critics have blasted it as a dull affair and lamented the lack and/or quality of fight scenes, and I think this is a bit puzzling.  It does fall well short of the high water mark set by the first season of Daredevil in this regard, but I think it has just as much action as the second season of that show and it surpasses both Jessica Jones and Luke Cage so far as both the quantity and the quality of showdowns are concerned.  Many have objected to the style of these battles, but I enjoyed seeing Danny presented as a more graceful and less vindictive combatant.  Daredevil is a street fighter and he brutalizes his enemies while Danny's mastery of martial arts is more akin to a dance, allowing him to smoothly evade attacks and swiftly incapacitate most enemies with ease.  His foes are more likely to wake up wondering what happened than to come to in traction with a long road to recovery ahead of them.  Again, I would have preferred a genuine martial artist in the part, but Finn did some cool stuff, and I greatly enjoyed the all-too-brief splitscreen bits that gave the proceedings a unique touch.  Finally, I would single out the sixth episode ("Immortal Emerges from Cave") directed by kung fu aficionado RZA as the strongest hour of the series, and any Iron Fist fan or martial arts devotee should have a blast with that episode. 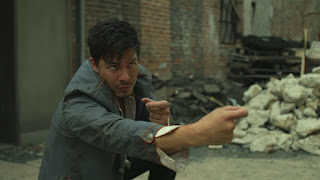 The other defining moment of the show arrived in episode 8, when Lewis Tan absolutely killed it as a master of drunken boxing.  As a whole, this episode didn't have the same power as "Immortal Emerges from Cave," but the fight scene pitting Iron Fist against Tan as Zhou Cheng (one of the coolest adversaries from the comics to pop up on the show) is easily the best action sequence of the first season.

In summary, while the show did suffer from several lapses in logic and some uneven plotting, that sixth episode and the big fight scene in the eighth episode may stand as the best evidence that Iron Fist was far from a failure and has the potential to rival Marvel's other Netflix shows.  David Wenham's killer effort as the heavy and Jessica Henswick's Colleen Wing were also big winners, and given time Finn Jones may just bring the haters over to his side.  I look forward to seeing Danny alongside his peers as one of The Defenders, and I'm hoping that a second season will shed more light on our hero's training in the mystical city of K'un Lun.  Was Iron Fist everything I had hoped for?  No, it did fall well short of that mark.  Was it a turd?  Shit no.  It was a good show with a wealth of untapped potential, and if Marvel and Netflix allow it to continue, there are definitely signs that it could deliver on all that promise. 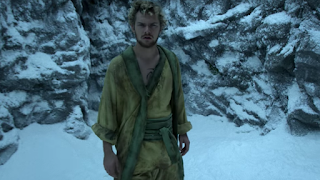