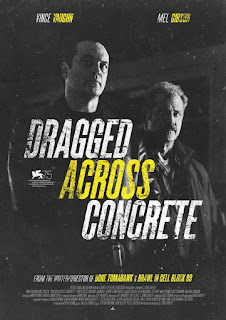 Some might bill Dragged Across Concrete as a dark thriller, but I'm not so sure.  Yes, it is punctuated by shocking acts of violence, and yes it centers on some cops and robbers interplay of a sort that we often see portrayed on the big screen.  However, its more about the characters and their circumstances than their actions.  Dragged Across Concrete struck me as a hard-boiled drama, a stark departure from a garden variety police procedural or a guns blazing shoot 'em up.  More to the point, everything is painted in murky shades of gray, and the picture is bereft of any classical good guys.  The standard rules don't apply either, and this gives the picture a few jolts that most movies in the same vein are lacking.  This is a movie about desperate people making desperate choices and hoping to survive in the wake of these fateful decisions.  The pace is methodical; a stakeout is explored with incredible attention to detail, and though shots are fired and bodies are shredded, Dragged Across Concrete is always more concerned with what its characters are doing between these outbursts of carnage and death.  This is Craig S. Zahler's third film, and it's clearly his most deliberate effort to date.  It is both a throwback and a subversion of the genre, and it will excite many viewers for the very same reasons that it will bore others.  Zahler also pushes a lot of buttons, with a lot of social issues coming into play, though he doesn't seek to preach or provide answers as much as he allows his characters to offer up pointed questions while grappling with life as they know it.  Stars Mel Gibson and Vince Vaughn fully embrace the material, and they invest such gravity into their performances that both disappear into parts that don't cater to their usual strengths.  Gibson simmers where he usually boils over, while Vaughn is more subdued and inquisitive than showy or declarative.  Tory Kittles upstages everyone as the unofficial third lead, an equally complex ex-con with a fluid knack for survival that serves him better than brutality or strategy serve his counterparts.  From the onset, we like all of these players in spite of their flaws, which are many, just as we recognize that this is not a happy ending kind of show.  While the gritty drama steadily nears a gruesome conclusion, we are continually surprised by the all too familiar yet oh so foreign plot.  It's not quite a masterpiece, but Dragged Across Concrete is really fresh, really intricate, and thereby really damn good. 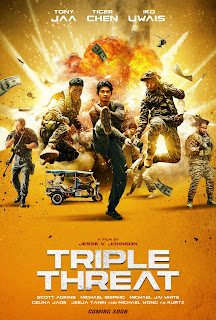 First off, let me acknowledge that as an action film, Triple Threat probably fails more than it succeeds.  The plot is riddled with so many holes that it is fairly nonsensical, the dialogue is atrocious, and a few poignant scenes are so sorely out of place that they veer toward purely unintentional comedy.  And, it should be noted, that as a kung-fu flick, it doesn't even approach the level of greatness that a venture with this cast could attain.  However, anyone who gets their kicks from this sort of fare will find plenty to enjoy nonetheless, because even a bad rock 'em sock 'em movie with these cats winds up being mediocre.  We've got Tony Jaa, Tiger Chen, Scott Adkins, and two of my all-time favorites, Iko Uwais and Michael Jai White, in the mix, after all.  And while director Jesse V. Johnson fumbles where the exposition (and pretty much everything aside from the action bits) is concerned, he does capture some excellent martial arts mayhem.  Unfortunately, some of the clashes are a bit too brief, and a few of these Grade A combatants never get to engage one another.  Yet the fights we do get are compelling match-ups, and all of the players get to show their stuff to devastating effect.  In particular, I loved seeing Uwais and White square off, and Adkins and Jaa also have a fantastic battle.  Chen also shines, doing a fine job in his work with MMA vet Michael Bisping, who proves rather adept at cinematic fisticuffs.  In truth, I think Adkins may steal the show, with his amazing talents establishing him as a stellar villain.  Dude is so versatile and smooth, he makes dizzying acrobatics look easy, and he can play an arrogant badass with the very best of them.  In a lot of ways, Triple Threat reminded me of one of those 90s martial arts movies I used to enjoy, pictures with guys like Gary Daniels, Don Wilson, and Billy Blanks taking on all comers.  The movies themselves were quite pedestrian, but the fight scenes made them worthwhile.  Triple Threat is far better than most of those, but it doesn't leave them in the dust the way it should.  Regardless, if you're a fan of this sort of show, or an admirer of any of the people involved, this is one you can't pass up.

Posted by James Wayland at 2:44 PM No comments: