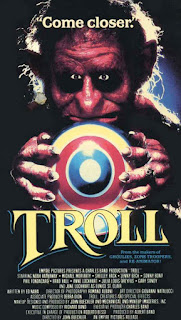 Is it merely a bad movie?  Or is it so bad that it's good?  That is the question.  Honestly, as much as I want to pardon this turkey because it was a staple of my childhood, I think the verdict is clear.  Like most any movie featuring the name "Charles Band" in the credits, Troll is lousy.  Now, it has a few things going for it, to be sure.  Sonny Bono is a riot, the basic premise is silly enough to guarantee a few outlandish thrills along the way, and Michael Moriarty is always a joy to watch in pictures like this.  In fact, his madcap dance scene where he grooves/suffers a seizure/goes gleefully insane while listening to "Summertime Blues" by way of Blue Cheer, is not only the highlight of this particular show, but it may be my favorite scene from Moriarty's career.  And if that doesn't do it for you, the big musical number performed by the trolls will definitely convince you that were a lot of drugs floating around on the set of this 1986 oddity.  So, yeah, all that stuff is fun and all, but that's where the fun ends and the ineptitude begins.  Aside from Bono and Moriarty, the cast struggles to bring much to their parts, and in fairness, the script does no one any favors.  The plot is clunky and littered with gaping holes.  While some of the effects are actually kinda gnarly, most of them are so pitiful that they wouldn't cut it if we were talking about a children's puppet show and not a motion picture.  To summarize, Troll is zany enough to make a viewing tolerable and yet amateurish enough to make the overall experience regrettable.

Posted by James Wayland at 6:08 PM No comments:

Shot Attention Span Review: Valerian and the City of a Thousand Planets (2017)

Short Attention Span Review: Valerian and the City of a Thousand Planets (2017)

I'm with those who believe the best science fiction out there is the most insightful and thought-provoking.  I'm less interested in groundbreaking effects than technological dilemmas or the notion of plumbing metaphysical mysteries through the lens of science.  That's why The Fifth Element didn't do a whole lot for me, and that's also why I wasn't all that keen on scoping Luc Besson's new sci-fi extravaganza out.  However, despite the absence of any big questions or startling discoveries, I found a lot to enjoy during my time with Valerian and the City of a Thousand Planets.  The plot has been trounced by most critics, but I didn't see it as hollow or illogical.  It may not have been complex or wildly original (like the zany effects, which did leave me breathless at times), but it was perfectly serviceable.  The visuals were mesmerizing, but much of my captivation stemmed from the creativity with which the effects were employed and not the mere presence of such vivacious eye candy.  Besson didn't just populate this picture with incredible creatures and sets, he found some really stirring ways to capture these elements.  In my opinion, Cara Delevingne gave the picture its center with an authoritative take on a role that could have emerged as more of a standard damsel in distress in the wrong hands.  I also enjoyed Dana DeHaan as Valerian.  He faced a bit of a backlash because many seemed to feel that a galactic hero/ladies man should have been played by someone like Idris Elba or The Rock.  No offense to those guys, but I found his presence here to be quite refreshing; the world is full of heroes and fellas with serious game, and believe it or not, most of them aren't muscle-bound hulks with classic good looks.  Valerian and the City of a Thousand Planets raced along, exploring brave new worlds and steadily dishing out dope action scenes.  By no means would I herald this one as a genuine classic, but it is certainly one cool trip.  Blast off with Valerian, and you may not ponder any great mysteries of the mind, but you will most definitely enjoy the ride. 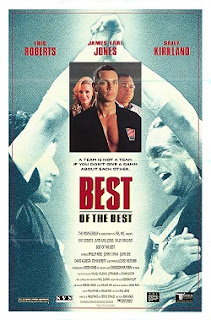 I do this out of love, peeps.  Writing this review feels a lot like baring my soul in some new and thoroughly uncomfortable way.  Why?  Well, because this cliched and entirely too emotional offspring of a kung fu flick cross-pollinated with a soap opera is most certainly a guilty pleasure of mine.  Crafting this blog will require me to profess my undying love for a picture that is remarkably bad.  As far as I'm concerned, Best of the Best is a case study in the rare art of getting everything wrong--and somehow getting it right.  Yes, the plot finds room for every staple of both motion pictures about sports and plucky underdog tales in general.  Yes, it shamelessly mines each of these tropes for every single ounce of melodrama.  It mines many of them twice.  Some of them may be mined a half-dozen times or more before everyone hugs it out at the weepy conclusion.  Yes, Eric Roberts takes over-acting to new heights, playing his role with less restraint than we might expect from Bill Shatner and Wings Hauser--if they were shitfaced and engaged in a fierce competition to see who could get booted off the set first.  Yes, the closing reel morality play is so overdone that it roughly equates to cooking your steak until it becomes jerky.  All of these things are true (and I haven't even touched upon the glam-rock soundtrack or Eric's hair, dear lord) and yet it is both entertaining and touching in spite of its glaring flaws.  Shit, much of the entertainment is reliant upon Eric's dedication to turning every other scene into an opportunity to work through the five stages of grief in one take.  In terms of competence, originality, and believability, Best of the Best must be considered an abject failure.  However, it bypasses the realm of "so bad it's good" filmmaking and somehow lands in "so bad it is marvelous" territory.   Yeah, I'll stand by that.  You'll marvel, all right.  You may even cheer.  You may cry a bit, doing your own Eric Roberts Lite routine, and you'll certainly feel like a dumbass for falling prey to this crap when that happens.  Honestly, I love it.  No shame, peeps.  I'm going to bat for Eric Roberts like Mickey Rourke here.  I would have given him the Oscar, no bullshit.  His performance in Best of the Best leads me to believe that his acceptance speech would have been the greatest thing to happen in the history of time.

Posted by James Wayland at 3:32 PM No comments: 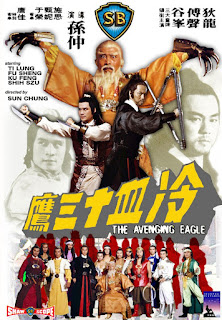 Sheng Fu and Lung Ti headline this Shaw Brothers gem from the year of my birth.  A revenge yarn with a bit more depth than one might expect, The Avenging Eagle doesn't skimp out on the studio's trademark choreagraphy and visual splendor.  Littered with well-staged battles featuring an array of combatants (each armed with a different weapon, none of which could be described as run-of-the-mill) and host to several striking sets and a smorgasboard of colorful costumes, this is kung fu cinema at its very best.  While inferior to hallmark films from the studio like The Five Deadly Venoms or Five Shaolin Masters, it is still a great outing that provides viewers with 90 minutes of top-notch kung fu treachery.  Of particular note is the relationship between the two leads and the way The Avenging Eagle avoids familiar tropes in an effort to strike a balance between revenge and redemption.  Make no mistake, this character development doesn't come at the expense of high-flying kicks and epic battles, for the story allows such meditation while remaining a bloody good time for fans of the genre.

Posted by James Wayland at 8:57 AM No comments: