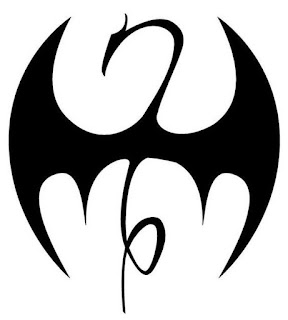 As a longtime fan of the character who never truly expected to see him appear on film or television, I am eagerly awaiting the debut of Marvel's Iron Fist on Netflix.  I will definitely be binge-watching the series this weekend, and I'll share my take once I have seen it.  Personally, I'm cautiously optimistic.  I'm excited because I think this property could be totally gnarly on the screen, and yet I'm a bit worried because it also has the potential to fall flat.  Still, I'm looking to forward to seeing whether or not it can wow me the same way that Daredevil, Jessica Jones, and Luke Cage have.

Having said all that, I must admit that I'm rather bummed by the nonsensical controversy that has led to a lot of bad press for the show prior to it being released.  Namely, a very vocal element of the PC police has apparently decided that white people shouldn't be allowed to practice martial arts or portray martial artists in the cinema.  A great many are deriding Iron Fist's ethnicity as some sort of appropriation, and these critics allege that Marvel should have abandoned the source material and the entire "stranger in a strange land" aspect of the character's origin.  Ever since Finn Jones was cast as Danny Rand in the lead role, there has been a lot of BS about "white saviors" and Asian culture being monetized out there in regards to the show, and there is a lot of genuine anger and outrage being directed at both Marvel and Netflix. 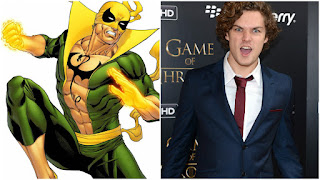 This irks me on a couple of levels.  Please, allow me to elaborate.

1) I'm a lifelong martial arts devotee, and I'm rather white, so of course I find it a bit ridiculous that there are those who believe that white people practicing martial arts is somehow offensive.  This argument is just as insightful as that "baseball is a white man's game" crap I used to hear from time to time in the foothills of rural Virginia.  Furthermore, I would argue that martial arts is a wonderful venture for anyone of any race who wants to experience all the many gifts that it has to offer, with those gifts including discipline, joy, confidence, respect, humility, and wisdom--and so much more.  Fortunately, in all the interactions I've had with other martial artists of various races (in various dojos, practicing various styles), I've never heard anyone express such a thoughtless perspective.

2) As a film buff and a martial arts devotee, I greatly enjoy a wealth of martial arts films (if you follow my blog, you know this already), and I feel that one really has to work at injecting vindictive political agendas and personal grudges into the viewing of such pictures to see them as monetizing any culture.  Additionally, while we Americans do love our karate flicks, it's probably fair to note that if one truly views such movies as some diabolical form of exchanging a precious culture for loot, they might want to go ahead and acknowledge that most of these pictures are . . . (gasp!) Asian.  So maybe we shouldn't burn Netflix or Marvel to the ground after all.  Of course, one so petty as to see the world in such a fashion could make similar arguments about westerns or any number of sub-genres, but it serves no real purpose.  I mean, it's not like we haven't seen people of virtually every race portray a martial artist in the cinema or on television at some point, so I just don't understand why anyone would expect Marvel to abandon the very concept of this character in their efforts to bring him to the screen.

3) The "white savior" bit is a real laugher.  Danny is pretty handy with his fists and his feet, but he's also a goofball who is frequently played for laughs.  Honestly, Negan from The Walking Dead is more apt to be described as a savior than Iron Fist.  Additionally, the mystical city where he got his powers has been around for a long time, and while Danny may have helped to save the day there on occasion, I don't think he's ever done it alone.  K'un Lun existed long before he got there and it should be around long after he's gone.  Besides, if you take Danny's origin out of the equation, it should be noted that he generally hangs out in the inner city.  Bonus points: he would have perished about a million times by now if he wasn't best buds with a certain black dude with unbreakable skin who serves as both the brains and the brawn of their unlikely partnership.  Apparently white saviors aren't all they're crackered up to be. 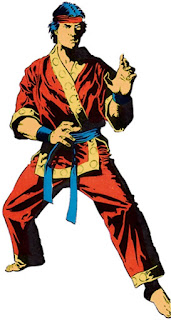 4) Shang-Chi!  Look, at the rate the Marvel universe is expanding in terms of its presence on the big screen and television, we're probably going to see Shang-Chi at some point--and Shang-Chi is an ultimate badass.  He could probably take Iron Fist down if he had to, and unlike Iron Fist, Shang-Chi doesn't have any mystical powers.  With that in mind, wouldn't Shang-Chi be a bit redundant (if not totally underwhelming) if Marvel did throw out Iron Fist's origin and have him be Asian in an effort to gain capital with a bunch of politically correct zealots?

5) Shang-Chi aside, there are a wealth of quality Asian characters featured prominently in the Iron Fist mythos.  I love Danny and all, but he's maybe half as cool as Lei-Kung the Thunderer.  Hell, Colleen Wing is going to be on the show, and she's a sensational character.  As someone who is extremely familiar with the material, let me assure you that it exists more as a tribute to kung fu cinema than any legitimate culture (the setting is a mystical city that doesn't exist, the characters have special powers, and there are dragons and stuff).  As such, anyone well-versed in the comics will surely note that the idea that Iron Fist exists to demean, diminish, or monetize Asian culture is no more a rational suggestion than aiming the same criticism at a film starring Bruce Lee, Jackie Chan, or today's reigning champion of martial arts cinema, Iko Uwais.  Perhaps most importantly, the comic book has always featured a stellar cast of male and female characters representing various races, and it probably features more Asian characters than any other Marvel or DC title that comes to mind, so it seems rather bizarre to aim such small-minded criticism at this particular property. 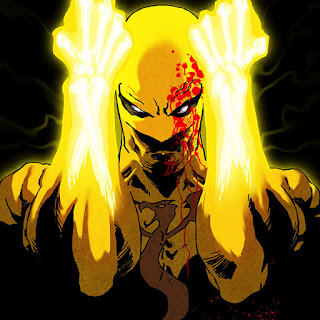 Honestly, that's about all I have for now.  Again, I'm white, and I practice martial arts (true story: I'm no Chuck Norris, but I've actually thrown a few punches and kicks on screen once upon a when), and I guess that makes me some awful devil who gets his jollies from raping other cultures for personal gain, so take my opinion for what it's worth.  Seriously, though, I'm looking forward to the show and I'll provide an honest review of Iron Fist here once I have watched it from start to finish.
Posted by James Wayland at 7:00 PM