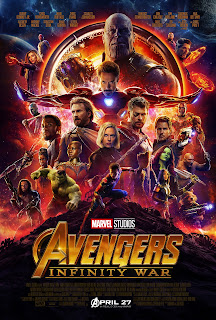 Having seen this masterpiece three times now, to include two showings at the theater, I feel that I am not rushing to judgment when I declare Avengers: Infinity War to be the best comic book movie of all time.  This is an instant classic, peeps, and it stands as one of the greatest cinematic achievements I have ever had the privilege of enjoying.  This is undoubtedly the biggest such spectacle ever presented on film, but with the superhero genre, in particular, we have often seen that too many ingredients spoil the dish.  That's not the case here, and this stands as the perfect culmination of everything we've seen from Marvel since they took the reins and established their cinematic universe.  Virtually everyone is on board, and everyone is given a worthy role.  Seeing these characters pair up and watching them spar with one another and the biggest bad ever seen in a motion picture is an absolute joy.  The script is flawless, with the feature displaying incredible depth and showcasing some of the best action setpieces we've ever seen, yet still managing to deliver an abundance of humor and several massive emotional beats along the way.  It's impossible to pick a standout as everyone brings their A-game and the Russo brothers make such marvelous (forgive me) use of all their talents.  I will say that the moment when the Guardians of the Galaxy hit the scene puts a tremendous smile on my face, and I do a fist pump every time grizzled Cap enters the fray.  But there's so much more--I also delight in Thor's MVP role in the proceedings, and you just can't oversell Josh Brolin's artistry in creating one of the most imposing and relatable villains imaginable.  I also loved seeing Black Widow, Scarlet Witch, and Okoye join forces, and that gut-wrenching climax is the stuff of legend.  Marvel has given a new generation an Empire Strikes Back experience times ten, though thankfully modern audiences won't have to wait three whole years to see the good guys rise from the ashes.  Marvel keeps raising the bar with their movies, but it is hard to imagine anyone topping this feast for the senses.  Like everyone else, I can't wait for the sequel, and even though I've just watched Avengers: Infinity War for the third time, I can't wait to watch it again either.  Best comic book movie ever.  Word life.

Posted by James Wayland at 5:48 PM