The Intangibles by Monte Dutton 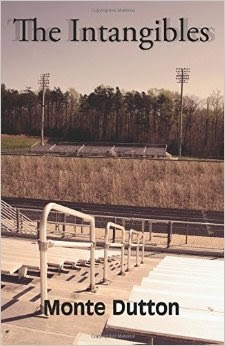 Yesterday I finished The Intangibles by Monte Dutton, a fine book that had me hooked from the start.  I read the last third of this compelling drama in a single sitting, eager to reach the conclusion--which was tense, exciting, comical, and heartbreaking.  That's quite an accomplishment.  It wasn't all that long ago that I reviewed Monte's novel The Audacity of Dope, and I'm officially going to label myself a fan of his work.

In truth, the prose was much cleaner in The Audacity of Dope and if I wanted to give someone the best example that I could of Monte's writing, I would recommend that one.  However, I enjoyed The Intangibles more.  It was very raw and very personal, and though it got a little muddy at times, the characters and the story spoke to me on a deeper level.  The Audacity of Dope was a slick and entertaining ride that dealt with complex themes in a lighthearted way.  The Intangibles takes a similar approach to themes that are more complex and a bit harder to wrestle with.  There are a great many laughs to be had while reading this one, but it also boasts some genuinely wretched people and some truly despicable schemes.

The book is set in 1968 and depicts the impact of integration on the people of a small town in South Carolina.  Much of the story centers on the local high school, where a pair of determined and thoughtful football coaches work to bring their team together.  In the process, they may just bring the community itself together, though there are those who are working just as hard to prevent that from happening.  The tale reaches well beyond the football field, following the lives of several players and their friends and relatives as they come to terms with the changing times--or, in many cases, as they fail to do so.  It is possible that there a bit too many characters involved and sometimes elements of this saga that deserve more attention seem a bit rushed.  Yet life can be equally overcrowded and abrupt, and as such, it is likely that some of this novel's flaws contribute to its authenticity.

There are meditations on more than race relations, as religion, sex, politics, and drug use and abuse play pivotal roles in the way the characters and their relationships develop.  As with any worthwhile drama, there are struggles, triumphs, shocking developments, and tragedies housed within the pages of The Intangibles.  It is clear throughout that Dutton is writing about things that matter to him, and one has to think that his personal experiences played a significant part in bringing this story to life.  While the end result may be a bit overwrought in some places and a bit jarring at times, it is a potent and meaningful story with a lot of soul, and it is surely worth reading.  The journey is enlightening and the climax is a stunning example of Monte's wit and talent.

You can purchase a copy of The Intangibles here.
Posted by James Wayland at 7:42 AM