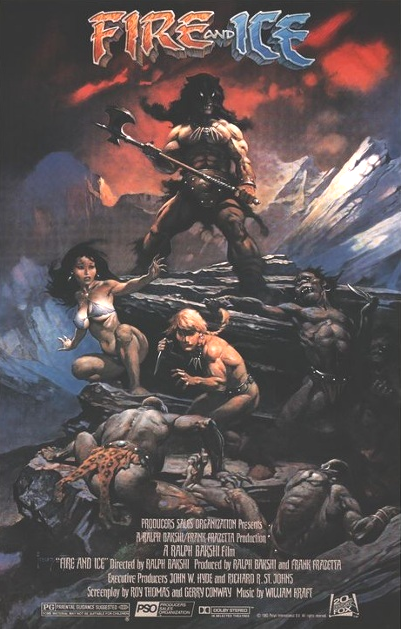 There was a time when animated features weren't just for kids.  In fact, many countries still produce feature-length animation for mature audiences.  In the late 70s and early 80s, Ralph Bakshi was at the forefront of such cinema here in the states.  In my opinion, his finest offering was Fire and Ice, the groovy cartoon that emerged when Bakshi teamed with legendary artist Frank Frazetta to dream up an action-packed fantasy.  While it brings nothing groundbreaking to the table in terms of plot, the story is serviceable and the characters (Darkwolf in particular) are memorable.  The animation still ranks among the best that I've ever seen, with some exceptionally nimble rotoscoping yielding some sensational setpieces--to include several ultra-cool slow-motion sequences.  The backgrounds are stellar and the color palette is perfect for a fantasy epic.  Anyone with a taste for this type of material will have a blast with Fire and Ice, while those who don't like swordplay, dragons, or cartoons probably won't have a change of heart while watching this one.  Running a mere 81 minutes, Fire and Ice is brisk and lively.  It's glorious to look at, easy to follow, and it is overflowing with adventure and excitement.  There has been some discussion about a live-action adaptation of this piece courtesy of maverick director Robert Rodriguez and I can only hope that there is some substance to those rumors.  If not, at least I still have this kickass cartoon to enjoy.