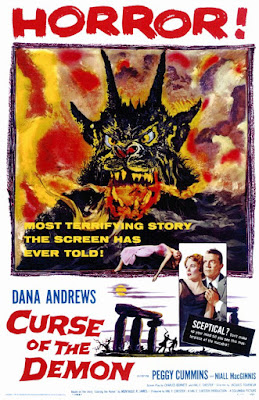 Atmospheric and tense, this notable chiller with a potent noir vibe is a delightful picture that remains engrossing.  Dana Andrews does a nice job as a skeptical leading man who has come to England to expose a satanic cult leader as a fraud.  Unfortunately, this endeavor goes awry when our wooden hero is cursed by the charismatic but twisted Doctor Karswell, who is expertly played here by Niall MacGinnis.  MacGinnis steals the show and his performance would surely stand as the biggest strength of Curse of the Demon if not for Jacques Tourneur's splendid direction.  The paranoia and the suspense that he generates throughout this twisted shocker are palpable, and despite a few hokey shots* of the titular menace, Tourneur's film is still a spooky outing that boasts several imaginative and frightening sequences.  The parchment that dances in the wind and the grand finale are perhaps my favorite elements of this beloved cult classic, but there are other sequences of merit generously sprinkled throughout the picture.  While it is treasured by many horror fans, it probably doesn't get the love that it deserves, and with that in mind I'm here to heartily recommend this creative tale of terror from 1957 to my readers.

*Allegedly, the shots of the demon were added by the producer against Tourneur's wishes.  Tourneur reportedly wanted to allow the audience to imagine the fearsome fiend instead of showing it, and the overall tone of the picture lends this theory credence.

Posted by James Wayland at 9:58 AM