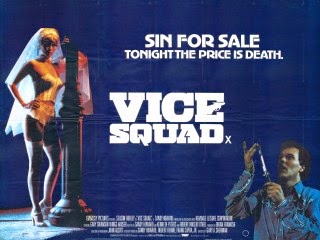 Let’s talk about Vice Squad, the masterful thriller that gave Wings Hauser the best role in his lengthy career, a role he played to absolute perfection.  Hauser is billed third, yet he clearly steals the show as Ramrod, a vicious pimp who is the villain of Vice Squad.  Ramrod is a true scumbag, but Hauser is so unbelievably powerful in the role that by the time we reach the closing reel there can be no doubt that this is Ramrod’s story.  In fact, Hauser’s lunatic pimp is so dogged and so focused in his efforts that he has become a figure that some fans of the film openly root for despite his deplorable actions and his psychotic behavior.

The picture unfolds during a single night in Hollywood, where the Vice Squad of the title is on the prowl. This gritty unit is led by Gary Swanson as Detective Tom Walsh, a 13-year vet of the force who is as close to burning out as any cop could possibly be right before his career goes up in flames.  When Walsh comes upon yet another of Ramrod’s victims, he goes to gruesome extremes to convince an unwilling working girl by the name of Princess to set a trap for the demented pimp.  Princess is played by Season Hubley in what may have been her best performance, allegedly drawing on the difficulties she incurred in the bitter custody battle with her estranged husband (Kurt Russel) that was wreaking havoc on her life while Vice Squad was shot in 1982.  Reportedly, Hubley encouraged director Gary A. Sherman to make good use of her distress during the film’s gripping finale, and it should be noted that she rises to the occasion and matches Hauser’s incredible ferocity during that violent struggle.

Walsh convinces Princess to wear a wire, and before long he has his man.  Ramrod vows to kill the double-crossing call girl, and of course it doesn’t take him long to escape police custody.  Then it’s up to the vice squad to keep Ramrod from getting his hands on Princess and making good on his promise, but this time the unit’s quarry clearly knows the neighborhood better than they do.  Ramrod doesn’t have a bankroll or any technological means to track his prey, but he does know the streets.  He also knows a lot of hoods and freaks, people who are either willing to help him find Princess or too scared not to.  As Ramrod lights up the night in a suicidal quest for vengeance, Walsh and his men do everything in their power to locate either the deranged pimp or the oblivious Princess, who doesn’t even realize Ramrod is loose again until it’s already too late. 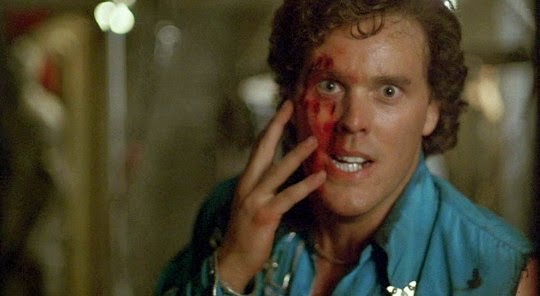 Throughout, Hauser rages across the screen, investing everything in a part that could have been very familiar in another performer’s hands.  His zeal and his devotion make Ramrod a vibrant character who threatens to leap off the scream and come charging into your living room.  Though Wings has had a long and fruitful career, including a role in Michael Mann’s The Insider, this performance (as well as roles in films like Tough Guys Don’t Dance and A Soldier’s Story) makes one wonder whether or not he didn’t deserve better roles in better pictures than the B-rate cheapies he later became famous for.  He’s on fire here, and he is the probably the primary reason so many people hold this little powderkeg near and dear to the heir hearts.  He certainly offered a lot to the production, as in addition to his bravura performance, Hauser also performs the vocals for the picture’s theme song, Neon Slime, which is played over both the opening and closing credits.  In truth, his acting is far superior to his singing, but the song is interesting at the very least, and Hauser had cut a record, 1975’s Your Love Keeps Me Off the Streets, so he has some talent. 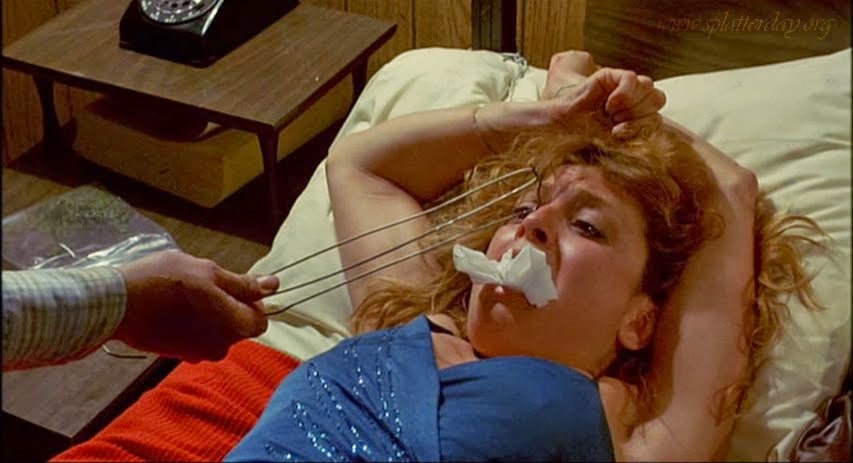 Vice Squad is a very entertaining piece that moves quickly.  This is largely due to director Gary A. Sherman, who cut much of the script that didn’t directly pertain to Ramrod’s pursuit of Princess in pre-production.  Sherman also spent a lot of time with actual policeman who worked in vice to prepare for the piece, as did star Gary Swanson.  In addtion to Vice Squad, Sherman directed Raw Meat and Dead & Buried, both of which are cult classics in their own right.  Though much of his later work came in television, Sherman’s early films are well-made outings with tight plots and rapid-fire pacing, leading one to ask the same questions of his career trajectory that we might ask of Hauser’s legacy.

In closing, Vice Squad is definitely a winner, and Hauser, Sherman, Swanson, and Season Hubley all make the most of this seedy journey into Hollywood’s underbelly. I treasure this film, but as an avid fan of Wings Hauser that shouldn’t come as a surprise.  Those who are unfamiliar with this brazen performer may find themselves taking an interest in his work after watching this film, but in all honesty this is probably as good as it gets for the man named Wings.  If you haven’t seen Vice Squad, I strongly encourage you to do so, as this film is a great example of a true cult classic.  It is fun, frantic, and offers a nice alternative to many of the less audacious crime films available to fans of such pictures.

Author’s Note:
This picture also boasts one of the funniest scenes I have ever beheld, an absurd little gem that has absolutely nothing to do with the plot itself.  I call it “The Paperclips Scene,” and it centers on an illogical and altogether hilarious police station rant about missing paperclips courtesy of an angry cop who is never seen again in the film.  That bit certainly stands out, but Vice Squad is positively brimming with memorable bits of dialogue.  Perhaps no line has been quoted by fans of the piece so much as the infamous “$500 don’t get you no El Dorado.”  Check it out and you’ll understand, and if you don’t laugh during The Paperclips Scene, you might want to check for a pulse. 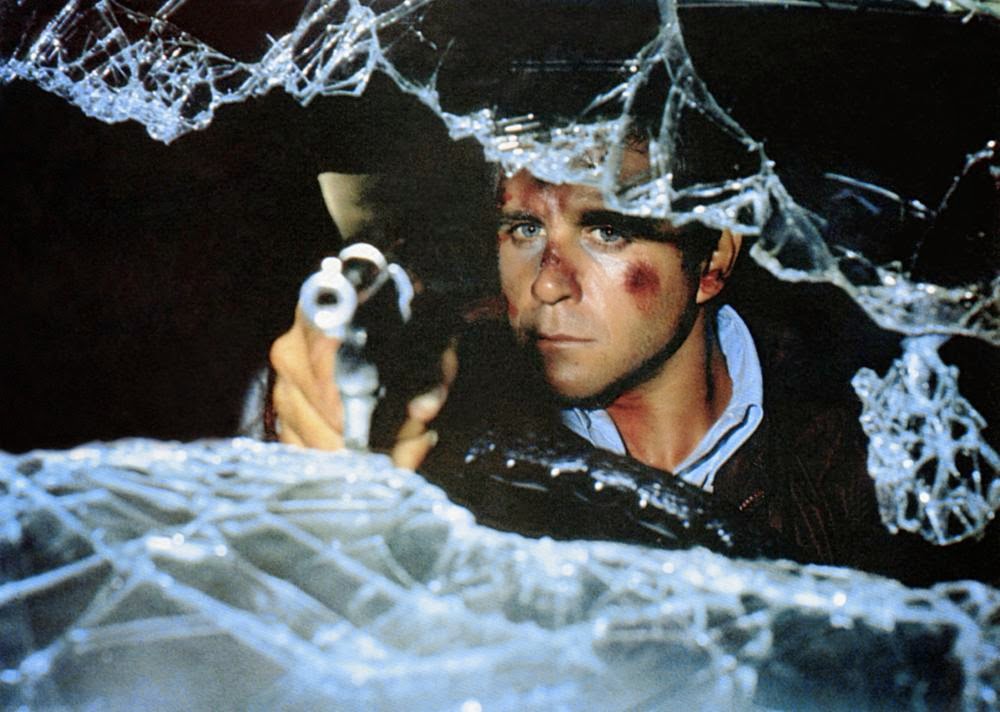 Reportedly, the film is at least partially based on actual vice squad cases that originated in the film’s Hollywood setting.  Indeed, the screen credit for Kenneth Peters is allegedly a pseudonym for the LAPD detective who opened his files for the production.

A young Martin Scorsese was allegedly a big fan of the film, reportedly going so far as to advise Dawn Steel that in his opinion Vice Squad was the year’s finest film.  This exchange supposedly occurred at an official Paramount dinner function.

Though it has never been confirmed, many feel this 1982 film (concerning the dogged pursuit of a woman by a ruthless madmen over the course of a single night) may have been one of James Cameron’s influences when he sat down to write The Terminator, which was released in 1984.

Note: Like many of my best non-fiction articles, this piece was originally published by RVA Magazine.  I'm pleased to share it with those of you who follow my blog, for I don't feel that there are enough people out there who appreciate the man known as Wings Hauser or this genuine cult classic.

Posted by James Wayland at 7:48 AM