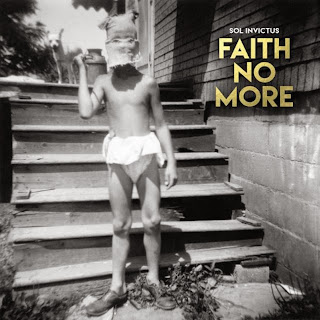 Fans of artists who partner incredible talent with vision and a powerful need to think outside the box (that's a pretty short list, right?) can circle May 19 on their calendars.  That's when Sol Invictus arrives, and the first Faith No More album since 1997 is absolutely delightful.  It may have been a while since these alternative innovators have produced an album, but you wouldn't know that by listening to Sol Invictus.  This brief yet stirring smorgasbord of sound surely warrants a piece of premium real estate on the island of misfit records FNM has provided us with.  It's obvious that these guys have grown as musicians and yet it is amazing how in sync with their overall approach and their impressive catalog this release is.

Faith No More is my favorite band and there was surely a point when, like most fans of this vastly underrated act, I didn't really think a reunion of any sort was ever going to happen.  Then they shocked us all by getting back together to play some shows, but most of the dates were on foriegn soil and there was no talk of another record.  Lo and behold, new songs began to emerge, and then there came a most blessed day when the band announced that they were going to create another sonic odyssey for the faithful (faithless?) to enjoy.

If I were to say that I was eager to listen to Sol Invictus, well, that would be a bit of an understatement.  The first time I gave it a listen there were moments where my smile grew so wide that it was almost painful.  It was a joyous experience, truth be told, and some of the music is rather joyful--though much of it is tongue-in-cheek and there's enough cynicism sprinkled throughout to give the feel-good elements of Sol Invictus an edge.  These light and tender sounds frequently give way to some of the most forceful and jagged landscapes the band has created, and the range of material is pretty damn epic (forgive me).  A few days have passed and I have listened to Sol Invictus maybe a dozen times, but that estimate could be a bit low.  Who's counting?  One thing is certain: Faith No More is back and these lovable weirdos have dropped a fabulous album on us.

1. Sol Invictus - warm and incredibly rich, this is a perfect way to get things started

3. Sunny Side Up - maybe my favorite track on the album, this one is incredibly lighthearted with just a hint of malice to keep you on your toes

4. Separation Anxiety - this is probably the heaviest song on Sol Invictus and it is one hell of a rollicking ride

5. Cone of Shame - there's something a little spooky about this slow burn with a thrilling transition and Patton at his most metal

6. Rise of the Fall - this is one of those trademark "impossible to classify yet incredibly groovy" gems that have made FNM such trendsetters

7. Black Friday - take my thoughts on "Rise of the Fall" and multiply by 2

8. Motherfucker - the first single that the band released for Sol Invictus (only Faith No More would release a single called "Motherfucker" to promote an album that legions of fans have been waiting nearly two decades for) aims to take my thoughts on "Rise of the Fall" and multiply by 10--seriously, it's one of the coolest and most bizarre songs that these guys have ever created

9. Matador - my bad, "Sunny Side Up," "Matador" is probably my favorite track on the album--it's incredible, it's kind of operatic when it isn't too busy being totally badass, and it allows everyone in the band ample opportunity to shine

10. From the Dead - the title may not make it sound like a soft and gentle way to close out a marvelous album with the sort of diversity that one doesn't expect from any band but FNM, but that's just what it is

Posted by James Wayland at 6:52 PM