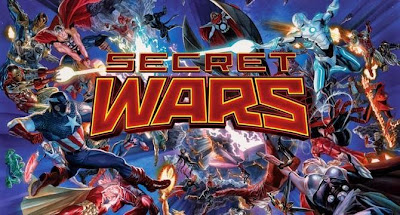 So, I just sat down to read the first issue of this epic throwdown that Marvel has been building toward for some time now, the 2015 version of the Secret Wars.  We've been told that the Marvel Universe as we know it ends here, and we're supposed to leave this event with some sort of combination of the standard Marvel universe and their Ultimates universe.  Yes, those universes will no longer exist separate from one another.  Allegedly, some of the characters we know and love won't exist at all (and could potentially--though it's unlikely--actually stay dead), and most of them will be forever changed, and so on and so forth.  If you dig comics, you've heard a similar pitch before.  Yet this crossover bears the name Secret Wars, so maybe the shit really is about to hit the fan.

Having finished the first issue, I think it's safe to say that big things are happening.  I also think it's safe to say that the big things that are happening are incredibly convoluted.  Honestly, after I read issue #1, I found myself thinking that if you took the contents of that comic book and spread it out over three or four issues, it might actually wind up being something you could read and enjoy.  Unfortunately, aside from a few key players who hung around for more than a single panel, we wound up with little more than a series of cameos.   Additionally, aside from a few crisp pages that nearly made sense, so much clunky exposition was offered up that I felt like I was reading an Alan Moore comic where he had been ordered to double up on the text.  "We need twice as much, Al, and make sure it's complicated."

Now, it's only the first issue, and I've found that many of Marvel's latest attempts at blowing our minds get off to uneven starts.  So maybe things will sort themselves out.  Unfortunately, I've also found that many of Marvel's most recent super crossovers fell well short of my expectations.  The superb Avengers vs. X-Men arc from 2012 is the only such event that I've really enjoyed since they damn near topped the original Secret Wars (which many credit with creating the crossover on an epic scale way back in 1984) with their Civil War in 2006.  So, I'm going to hope for the best, but man oh man, we are off to a rocky start.

What do you think?  Am I being too hard on the new Secret Wars?  Am I failing to understand this stuff because I'm reading the wrong comics?  This is possible, as Marvel and DC both quickly cancel titles after realizing that I've added them to my reading list.  Maybe you think it was even worse than I did--though, for that to be the case, you probably would have thrown that shit in the trashcan before you finished and you probably wouldn't be reading this particular blog.  Whatever your take on the 2015 Secret Wars is, feel free to clue me in.  I'm searching for answers here.

Posted by James Wayland at 7:33 PM