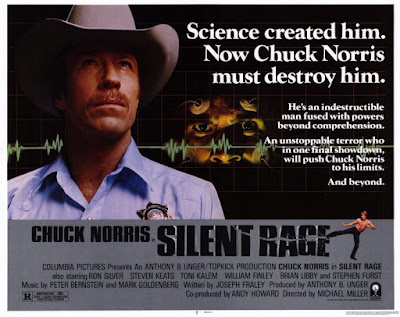 An attempt to blend a slasher film with a Chuck Norris action flick, Silent Rage is surely a mixed bag, but it is a highly entertaining mixed bag.  It does many things extremely well and it does many things just as poorly.  Thankfully, it starts and finishes with grand flourishes and this makes the movie's shortcomings easier to digest.  In the interest of full disclosure, I will note that some of these shortcomings do venture into the realm of unintentional comedy; the romantic subplot is a genuine disaster, and the Stephen Furst stuff* is damn near unbearable.  However, the horror bits are both the backbone and the best parts of Silent Rage.  In addition to some quality suspense and a handful of nifty jolts, the slasher aspect of the picture yields several wicked action scenes pitting our man Chuck against a murderous madman who cannot be killed.  Of course, there's also a totally needless subplot pitting Chuck against a biker gang in the early going that leads to one quality brawl but ultimately seems out of place.  Like I said at the start, it's a mixed bag.  After that rock solid opening sequence, the movie flounders until psycho killer John Kirby (played by Brian Libby) rises from the dead as the result of a forbidden experiment gone awry.  This unstoppable madman proceeds to wreak havoc and there's a significant portion of Silent Rage where Kirby stalks Ron Silver (in a rare sympathetic role) and his wife.  These sequences are incredibly intense and boast the film's biggest scare.  There's a bit of cat-and-mouse shortly thereafter in a hospital that is also riveting, and the big finale is very satisfying.  The final shot is a standard genre trick, but it is executed to perfection and ends the film on a horrific note.  If the movie were more focused on delivering on its premise and less interested in forcing romance and comedy into the mix, Silent Rage might have been a minor classic.  As it is, it still stands as one of Chuck's very best, and I would honestly rate this one as my favorite movie in his catalog given my horror jones and the strength of the parts of the movie that work.

*As Charlie the dopey deputy, Stephen Furst bombs in a big way.  His efforts at providing comedic relief fall flat and the very presence of his character is easily the movie's biggest shortcoming.  I can't be the only one who shakes my head at the way Chuck Norris constantly assures this poor excuse for a human being that he has what it takes to be a good lawman.  Making matters worse, the end result of this exercise in poor judgment is a gruesome demise for Charlie that subsequently requires Chuck to tenderly cradle the big dumbass in his arms for a tearful goodbye.  If you can imagine that scene being anything less than an affront to acting, you have a fabulous imagination and you should definitely start your own blog.

Posted by James Wayland at 1:16 PM