And now, ladies and gentlemen, here's Jack!  Don't worry, he's not here to hurt you.  He just wants to bash your brains in. 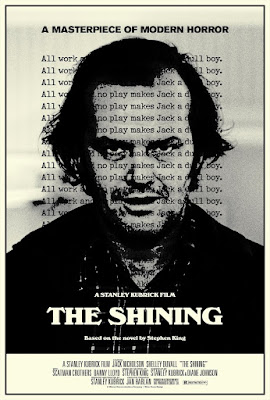 More akin to a different vision of Stephen King's terrifying book than a faithful adaptation of that titan's work, this Stanley Kubrick venture is definitely one of the most striking horror films of them all.  Jack Nicholson is front and center throughout, and he wrings every drop of entertainment out of an iconic part.  True, Nicholson's Jack Torrance lacks the depth and the warmth that makes his literary counterpart's sinister downfall a tragic affair.  Yet his take on the character yields one of the most sensational villains in the history of the cinema, as Jack's work in The Shining is both horrifying and a joy to behold.  It is most certainly a performance for the ages, and thought it towers over the motion picture itself, Kubrick's peerless direction and Shelley Duvall's emotionally charged acting are also superb assets that are integral to the success of this beloved classic.  While some may chafe at the way Kubrick disregards many aspects of the source material, the movie has an irresistible appeal and it is clearly a horror film of the highest order.  The technical merits of The Shining are beyond reproach, and while there can be no doubt that Stanely Kubrick was both immensely talented and incredibly prolific, I think that this terrifying journey into insanity and violence is his most remarkable film.  Furthermore, though his career is littered with fabulous star turns, this is probably my favorite example of Jack's magnificent talent as well.  The Shining is both legitimately creepy and totally fascinating, and it greatly benefits from the presence of a gifted cast and one of the finest directors in the history of the cinema.

Posted by James Wayland at 9:45 PM