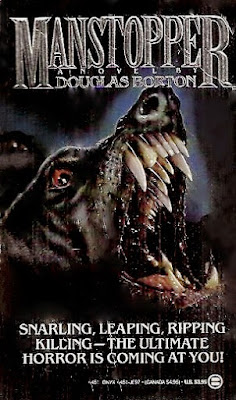 Manstopper is one of a handful of novels that I read from cover to cover in a single sitting the first time that I picked it up.  I have revisited it several times over the years and it never fails to entertain me.  This isn't all that surprising, as I'm a big fan of "nature runs amok" fare, with Jaws standing as the obvious high-water mark for that particular sub-genre.  Manstopper takes a different approach and is vastly inferior to Peter Benchley's beloved masterpiece, but it is a fine book nonetheless.  The story centers on a pack of deadly dobermans preying on the unfortunate inhabitants of a quaint little town.  These fearsome animals have been trained to kill, and when they're set loose upon an unsuspecting populace, gruesome terror ensues.  Manstopper features likable characters and an appropriate setting, and Borton does a fine job with all the suspense and outright terror that his killer dogs conjure up.  Each of these fascinating creatures has a name and a personality, and the author's efforts to capture portions of the tale from their perspective are admirable.  There's also a human villain in the mix, and the plot is just complex enough to allow the reader to really sink their hooks in while remaining simple enough to rocket along at a breakneck pace.  The author shows little restraint, but I don't think that the novel ever devolves into trashy pulp--though it certainly toes the line at times.  Manstopper is a thrilling book with a gripping climax that is totally satisfying.  Douglas Borton (who now writes thrillers as Michael Prescott) engineered a nifty exercise in excitement that delivers the goods when he wrote this book with enough bite to match a considerable bark, earning a spot on my list.
Posted by James Wayland at 10:09 AM