And now for that other werewolf tale from 1981, the best film that particular sub-genre has given us. 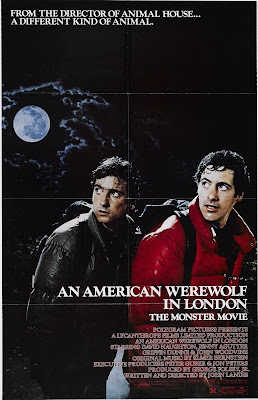 The finest werewolf movie ever filmed is quite the absurdity.  Director John Landis takes several familiar staples from this particular sub-genre and employs them to tremendous effect, yet he also runs wild with the concept.  Thus, there are big laughs, horrifying nightmare sequences, and dead friends who still drop by from time to time to hang out and encourage our main character to kill himself.  The transformation sequence is the stuff of legend, and the soundtrack that Landis put together (every song refers to the moon) is positively delightful.  The cast, led by David Naughton and Griffin Dunne as a pair of American backpackers, is splendid, and the script is lively and inventive.  Like the other movies to make my list that include a bit of humor, the film never becomes a parody, and the chuckles are offset by some chilling material that greatly benefits from stellar effects work and an obvious affection for gore.  The movie does a great job of developing a sinister mood that is frequently interrupted by gruesome hijinks and those devilish nightmares.  The end result is a special picture that is truly unique.  While offering up a sound and gripping yarn about the tragic curse of the werewolf, An American Werewolf in London takes lots and lots of left turns along the way, keeping the audience on their toes.  It's a joy to behold and calling it the finest werewolf movie ever filmed seems like a bit of an understatement.  No other film of this ilk has ever come close to challenging An American Werewolf in London for that title, and it's hard to believe that such a film will ever be produced.  This wild and hairy ride is a delirious smorgasbord of delights that should thrill any red-blooded fan of the horror genre.