Last time out, we turned the clock way back to 1954, where we discussed the oldest film to make my list.  Today, I'm breaking down the most recent film to make the cut. 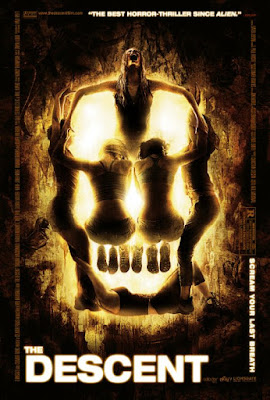 This claustrophobic feature from 2005 delivers the goods so far as both internal and external fright is concerned.  The Descent is a movie that is willing to do anything to destroy your comfort zone and subject you to absolute terror.  The plot follows a group of adventurous women who enjoy extreme sports.  Hoping to offset the grief one of their members is dealing with as she struggles with the loss of her husband and daughter in a tragic accident, they prepare for an expedition into a pedestrian cave.  Unfortunately, this attempt at social therapy goes badly awry when their leader elects to forego the novice grotto and instead leads her peers into an uncharted system.  Early on, a passage becomes blocked, and these unlucky ladies know there is no hope of rescue as the proper authorities believe they are in another cave altogether.  Now, these feisty females must find a way out before their batteries go dead and they are lost in the darkest recesses of the Appalachians.  This is a terrifying premise, but things get worse when writer and director Neil Marshall injects cannibalistic humanoid monstrosities into the mix.  Expertly plotted, well-acted, and bolstered by sensational cinematography and effects, The Descent is a relentless horror film that is packed with tension and fright.  It is one of the most terrifying films to make this list, and I will add that I really dig all the girl power on display throughout this riveting gem.  If I was making a list of the scariest horror movies ever, this incredibly dark motion picture that doesn't pull any punches would rank even higher.

Posted by James Wayland at 8:24 AM