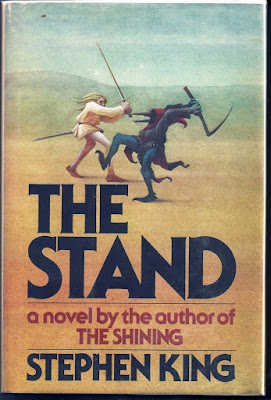 First off, while I would happily include either version of this massive tale on my list, I do prefer Stephen King's expanded and updated version from 1990.  Either way, this epic struggle between good and evil is one of the most impressive books I have ever read.  The Stand's reach extends well beyond the horror genre and it may be King's greatest achievement.  I favor another of his works (more on that later), yet I think those who proclaim this as the finest horror novel of our time have a solid argument on their hands.  Populated by vivid characters (some of whom are good, some of whom are evil, and some who are true wild cards), this devastating tale is overflowing with riches.  Trying to pick a favorite character or sequence is all but impossible, and the book is ripe with terror, suspense, and drama--hell, there's even a bit of romance thrown in for good measure.  The quality of the writing is a testament to both the power and the charm that King wields, and the imaginative plot coupled with the dark horrors that roam these pages clearly display why genre fans have so much affection for this visionary author.  To read The Stand is to fall in love with it, and this stellar opus set the bar for any attempt to tell a scary story on a grand scale.  New readers will be blown away by the experience, and fans of the book who choose to revisit this one will always find something new to cherish upon their return.  The Stand isn't just a classic horror novel, it's truly one of the best novels ever written.
Posted by James Wayland at 7:36 AM