Yes, Suspiria was a strange one, but this next one may be even stranger.  We're sticking with the late 70s theme we've got going, and the time has come to throw down with sinister dwarfs and a ghastly mortician armed with deadly spheres that suck people's brains out.  That's right, peeps, it's time we got our Phantasm on. 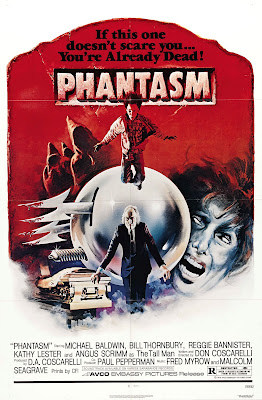 Phantasm isn't just one of the strangest horror films out there, it's also one of the coolest.  How often do you get to see a movie where a gutsy ice cream man who plays a mean guitar goes toe to toe with a terrifying mortician from another dimension?  Delightful, right?  Our main characters are an exuberant teenage boy whose brother may or may not be dead, said brother/ghost/I'm-not-sure-what, and Reggie the ice cream vendor, one of the horror genre's most beloved heroes.  While Reggie Bannister absolutely kills it as Reggie (all of the leads in this flick have the same first name as their character), Angus Scrimm dominates the proceedings as the villainous mortician, known simply as "The Tall Man."  Scrimm's work here is so unique and so totally on point that he grounds this delirious flick and keeps audiences riveted throughout all the strange twists and turns that Phantasm takes on the way to a wonderfully bizarre conclusion.  The effects are solid, the score is epic, I treasure the performances, and the script and the direction c/o Don Coscarelli are extremely exciting and expertly realized.   This movie has everything going for it, and it delivers the goods--Phantasm is an awesome blend of scares, chuckles, and crazy shit.  That gonzo finale gives way to one last big scare, cementing Phantasm's status as an iconic horror film that has inspired several sequels aimed to please a rabid fanbase that is still clamoring for more.  I have been a big fan of this film (and Coscarelli's output in general) for most of my life, and I can't imagine putting together a list like this without including Phantasm.

Posted by James Wayland at 1:13 PM