So far, we've been hanging with monsters, werewolves, zombies, and aliens.  Today, we keep the late 70s motif that started at #17 alive and invite some witches to the party. 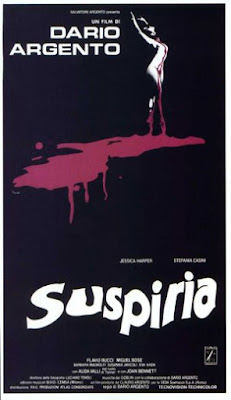 Suspiria, a gruesome nightmare that many consider the finest example of Italian horror, is one of two such pictures to make my list.  The other is also directed by Dario Argento, a gifted filmmaker who spent much of the 70s and 80s churning out stunning motion pictures before descending into mediocrity in the 90s and beyond.  This inventive yarn is a dark fairy tale of sorts, with a roving camera and a bold color palette which give the picture a surreal tone that is positively enchanting.  The score by Goblin is one of the most striking scores that the horror genre has ever been blessed with, and the bloody effects work is top-notch.  The script is simple but effective; Jessica Harper's Suzy Bannion travels to a prestigious dance school where something is seriously amiss.  After a number of grisly murders occur and our heroine starts to investigate some spooky shenanigans taking place, Suzy discovers that the academy is merely a front for a coven of witches.  Argento was at his peak here, and the ominous atmosphere and the outright terror that he is able to conjure up throughout this fascinating picture is damn impressive.  Some of the kills in this movie are incredibly disturbing, and there are a handful of less violent sequences in the mix that are ridiculously creepy.  The cast performs well, with Harper giving her best performance and genre vet Udo Kier popping up in a brief but welcome part.  Despite his recent misfires, of which there are many, I still consider Dario Argento a legend in the realm of horror cinema for his incredible body of work--and Suspiria undoubtedly ranks among his very best.  In fact, while I favor another picture (those who follow my blog closely are already aware of this, but the rest of you will have to wait and see), most probably consider this to be his greatest achievement.