As I celebrate the month of October with all my fellow horror fanatics, I'm ranking my Top 20 Horror Movies for you.  Thus far, the list includes:

And now I'm pleased to unveil my latest selection, another spectacular horror movie from the 80s! 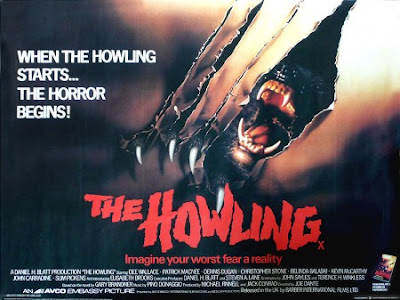 One of two werewolf movies to make the list, The Howling is a twisted frightfest that I have a lot of affection for.  It has all the necessary ingredients for a quality horror flick, to include a worthy cast, an excellent setting, some creepy visuals, and an ominous mood.  The script by John Sayles varies greatly from the novel by Gary Brandner, but brings an engaging and fearsome story to the screen to superb effect.  Director Joe Dante does a tremendous job, and while I'm a big fan of Joe's other genre efforts (most notably Gremlins and Piranha) I believe that this is his best feature film.  It's tightly paced, brimming with atmosphere, and loaded with shocking sequences.  I'm awarding some serious bonus points for the unnerving opening and the equally disturbing conclusion.  There's also a nifty scene midway through the picture that surely ranks as one of the most frightening horror scenes out there that takes place in broad daylight.  The cast is stellar, with Dee Wallace slaying it in the lead role with quality support from players like Patrick MacNee, Kevin McCarthy, Slim Pickens, and the one and only John Carradine.  Pino Donaggio gave the film an eerie score that is a splendid fit for all the spooky shenanigans unfolding on the screen.  The Howling is equal parts engrossing, entertaining, and terrifying.  It is somewhat amazing to me that both this picture and that other werewolf movie released in 1981 (a superior effort that is ranked much higher on my list) remain the finest attempts to bring lycanthropy to the cinema.