I'm going to put our late 70s theme on hold so we can turn our attention to the only true sequel to make my list, Sam Raimi's maniacal return to the the cabin in the worlds where Ash and his friends unwittingly unleashed deadites on the world. 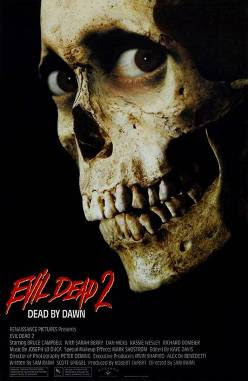 When Sam Raimi made a name for himself in the horror genre, he did so with The Evil Dead, a grim affair that was dark, dreadful, and brimming with bodily dismemberment.  It was a bit of a shock when he followed that picture up with this sequel, a delirious effort that mixes demonic possession and severed limbs with heavy doses of slapstick humor that would have garnered applause from The Three Stooges.  Yet Raimi's high-energy direction and Bruce Campbell's immaculate chin made this mash-up an astounding success.  Three decades later, fans are eagerly awaiting the latest from this franchise, the Showtime series Ash Vs. Evil Dead, which is set to debut on October 31, 2015.  If that show is half as good as Evil Dead 2 (and based on what I've seen, I'm pretty damn optimistic), we're in for a real treat this Halloween.  Fast-paced, funny, and utterly ridiculous, this is surely one of the most purely entertaining movies to be featured on my list.  Everything about this cult classic is aimed at being so over-the-top that it makes William Shatner's work seem like method acting.  The effects, the performances, the score, and Raimi's wild camera work are all designed to wring every drop of fun out of a kooky script that allows for an abundance of gore and some of the silliest bits you'll ever see in a horror flick.  In short, Evil Dead 2 is a zany descent into horror and comedy that works to sheer perfection.  While I'm not at all surprised that it made the cut, I am a little surprised that I didn't wind up ranking it much higher on my list.