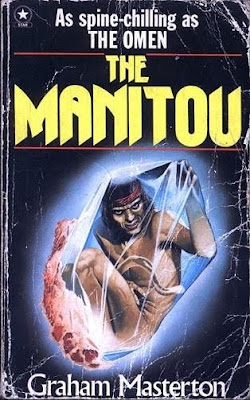 Graham Masterton can be a little hit and miss and he certainly favors entertainment over plausibility, but when he's on, he can dish out terror with the best of them.  The Manitou is a great example of his talent, and while it may be a bit too bold for some (and far too politically incorrect for others), it is undeniably intriguing from start to finish.  In addition, while some of the terminology and the conclusion ("Red Indians" pops up a lot and a white dude does seemingly triumph over Indian magic in the end) may be seen as an affront to Indian culture, there's also a lot of love for that same culture embedded in the text.  The character of Singing Rock, a heroic medicine man who puts aside his hatred of the white man to battle an ancient evil that he knows he cannot stand against, is a great example of that affection.  I believe that many of the flaws regarding the author's interpretation of both American culture and Indian culture can be chalked up to the fact that Masterton is British--and this was his first novel.  As such, it does have its flaws, but it is also filled with shocking moments and terrifying imagery, perhaps the best example of which is the gruesome "rebirth" scene.  Masterton does a stellar job of summoning a sinister atmosphere that may linger with readers long after they have finished The Manitou.  This debut effort spawned a decent movie that mostly succeeded in emulating the book right up until the wheels fell off during an incredibly ill-advised attempt to depict the novel's climax.  Masterton has revisited Indian culture frequently throughout his career to great effect, and he has written several quality sequels to The Manitou.  The third entry in the saga (Burial, published in 1991) is particularly worthwhile, but this 1975 horror novel remains Masterton's finest offering.

Note:
I should probably point out that Masterton blended Indian mythology with H.P. Lovecraft's Cthulhu mythos in The Manitou.  While we are dealing with fiction and I think this is rather badass, in 2015 there are surely those who will view this aspect of the book as culturally insensitive as well.
Posted by James Wayland at 8:20 AM