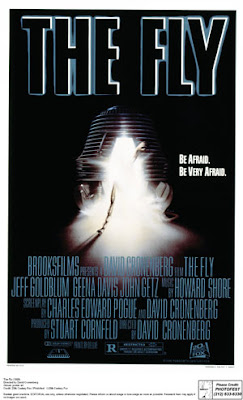 The first entry on my list is one of three remakes to be included.  This one is surely the wildest departure from the original, as this somber tale bears little or no resemblance to the cheeky Vincent Price vehicle from 1958.  This 1986 version of the The Fly is directed by David Cronenberg, one of the most visionary directors of them all.  Cronenberg's intense and often perverse work has largely originated within either the horror genre or the science fiction genre, and I think this deliberate terror yarn stands as his grandest achievement.  It's also the best work that Jeff Goldblum has ever done, and his total immersion into the part of Seth Brundle, a daring and strangely charismatic scientist, is amazing to behold.  Throw in some fabulous effects work and an eerie score by Howard Shore and you have the makings of a classic.   This version of The Fly is a slow burn that works magnificently.  The first two acts are largely about meeting the characters and witnessing a failed experiment and the subsequent transformation as Goldblum's wacky but lovable scientist becomes one of the most grotesque monsters ever put on film.  These portions of the film are ripe with suspense and dread, while the third and final act is where most of the gruesome action takes place.  The film is potent; the combination of disturbing visuals and difficult content make it every bit as emotional and dramatic as it is frightening.  Yes, this version of The Fly is everything that I'm looking for in a great horror film, and viewing it remains a riveting experience that I highly recommend.

Posted by James Wayland at 9:30 AM