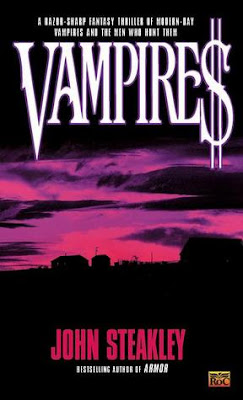 First off, I should acknowledge that this book was the basis for John Carpenter's Vampires, one of my favorite director's lesser films.  The movie was entertaining (a lesser John Carpenter film is still a worthwhile spookshow), but it was a far cry from this cinema titan's finest efforts.  I also want to point out that there is very, very little in the way of similarities between the book and the movie.  Honestly, they took the main character (Jack Crow, a wise-cracking anti-hero) and the idea of professional vampire hunters working for the Catholic church, and they proceeded to tell their own story.  Despite its shortcomings, I like the picture, but if is woefully inferior to this tense and exciting book that delivers a lot of terror and a number of thrills.  While the vampire mythos remains popular, vampires that are genuinely scary are certainly a rarity these days.  All too often, they've been presented as heroes of some sort or laughable caricatures in the Bela Lugosi mold.  In 1990, author John Steakley managed to give these creatures of the night some serious bite, and while legions of lovestruck females still have "Team Edward" tee-shirts hidden away somewhere, no one would want to humor the prospect of going on a hunt with Team Crow.  Though the vampire slaying business is booming in Vampire$, it is depicted as a job fit only for the truly deranged.  Thus Jack Crow is aided by a rowdy band of likable lunatics, and their frantic efforts to wage war with the undead are the backbone of this grim tale that manages to generate a few sly laughs along the way as the characters we come to love are slowly but surely destroyed by the crusade they have undertaken.  There is a section in the middle of Vampire$ where a subplot that borders on erotica nearly takes all the life out of the novel, but it is sandwiched between a wealth of carnage that is guaranteed to keep readers invested in the tale.  One can only wonder how awesome a faithful adaptation of this one would play out on the big screen, but at least we will always have this wicked book to sink our fangs into.
Posted by James Wayland at 8:26 AM